The Jefferson County Courthouse, located at the corner of Third and Market Streets in downtown Steubenville, was erected in 1874 and has served the people of Jefferson County for 141 years. While modern lighting and other improvements have been made over the years the interior and exterior design remains unchanged. The most noticeable improvement being the addition of an elevator.

In 1950, over the Thanksgiving Holiday, a major snowstorm dumped four feet of snow on the valley, causing the roof of the Courthouse to collapse and major damage to the upper floors. Many county records were also lost.  It was decided to restore the original rather than replace it, however the original County Jail was replaced with a more modern one which became offices when the new Justice Center was built. The original “Jefferson County Courthouse” will serve the people of Jefferson County for many decades to come. 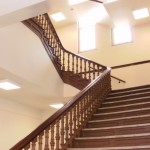 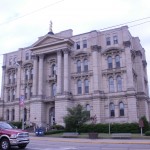 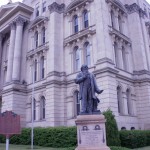