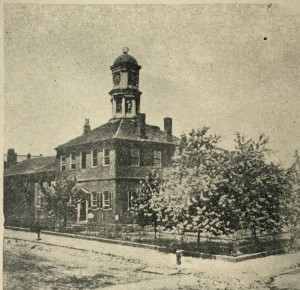 The following is copied from the 1897 Centennial Souvenir, page 26.  Note the cost was to the half-penny.

Part of the ground on which the present Court House is located was presented to the Justices of the Court of Common Pleas as a Court House site, by Bezaleel Wells, by deed dated August 15, 1798.  The first Court House, a log structure, was torn down in 1807, and a new building completed in 1809.  This second Court House was a two story brick structure, built by Thomas Gr 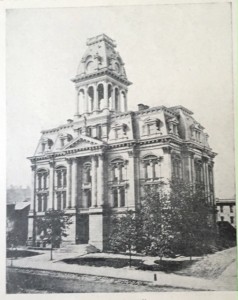 The erection of the present magnificent temple of justice was begun in 1870, and it was completed in ’74.  It, with the additional ground purchased at the time, and the other county buildings erected, cost about $300,000.  The building, which is one of the finest of its kind in the State, is constructed of Northern Ohio sandstone and is 151 feet in height to the top of the tower.

The bell from the second court house shown above now resides in the original office of the Union Cemetery.

Posted On October 9, 2015
The following is copied from the 1897 Centennial Souvenir, page 26.  Note the cost was to the half-penny.   Part of the ground on which the…